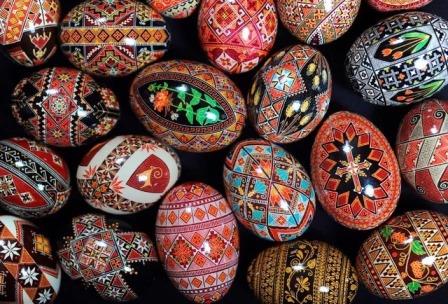 These beautifully decorated Easter Eggs are known as “pysanky,” a custom that originated in Eastern Europe and particularly in Ukraine. Looking like they came right out of a fairy tale, the ornate designs are intricate and colorful. But they are also meaningful and powerful.

The origin is a actually pre-Christian. Pysanky originally came from times when people worshiped God in nature. The eggs were made in the spring and believed to have the power to entice the sun to return to the earth in longer, warmer days and a good growing season. The eggs were literally prayers for the earth and her people. When Christianity came to the area it was an easy move to incorporate the eggs into the Easter celebration of life and new life in the resurrection of Jesus. Still retaining images of God’s creation—plants, birds and animals, they also include crosses and have themselves become Christian symbols of Easter and new life.

They were not only beautiful decorations but had special purpose. The shells of the pysanky were placed in the walls of houses being built as a prayer for blessing for the new home. They were buried in the ground to bless fields and gardens to bring an abundant harvest. They were mixed in cattle food to encourage strength. Eggs were even placed in beehives in hopes of continuous honey.

In the Soviet era under Stalin the eggs were banned when all kinds of religious traditions were eradicated. But the artistry of “writing” pysanky has been kept alive in the diaspora as Ukrainians moved all over the world to escape Stalinism.

I heard a story the other day on the radio about a woman in New York whose family is Ukrainian. She has established Pysanky for Peace. She and others all around the country are creating all kinds of beautiful pysanky she intends to take with her back to her ancestral homeland after the war.  She plans to bury them in fields which are now battlefields, that will one day be replanted. She also intends to put them into the walls of buildings being rebuilt as prayers of hope for Ukraine’s rebirth. She said, "We're going, we're going with hammers and nails...And these eggs are coming with us!"