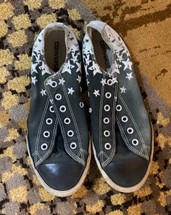 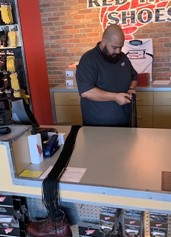 Two weeks ago, I began writing about my time volunteering when I was on sabbatical in August
at a transfer hub in San Diego, CA, for those coming into the U.S. who had been granted
hearings for asylum. Everyday U.S. Immigration and Customs Enforcement (ICE) dropped off a
couple hundred people who have surrendered at the border seeking political asylum. These
“guests” are mostly young families who are released from custody as they arrive on ICE busses
at a hotel run by the State of California. While at the hotel they receive medical care; COVID
shots, if needed; lodging; a change of clothes; food and a ride to the airport so the asylum
seekers can fly to meet their sponsors. I was working with Catholic Charites to help provide
hospitality in the form of hygiene products and donated clothing available the couple of days
the guests were there.

I never would have guessed that what those seeking asylum really need is shoelaces.  But they
all come into the hotel wearing shoes sans laces. ICE is a law enforcement agency, so it is their
policy to confiscate everyone’s laces while in their custody. No exceptions, not even kids. They
are afraid of the laces being used for suicide while in detention; I guess.  The ICE policy does not

include giving the laces back when those seeking asylum are released. I get the reasoning for
the policy, but why anyone would seriously think that someone who risked their lives coming
many grueling miles from God knows where would pose a threat to kill themselves in a US
border detention center is beyond me.

The items we had to give out were all donated and very random. With a couple hundred
people arriving daily who need anything and everything, nothing lasted very long. I felt so bad
after a couple of days telling people that we were out of shoelaces that I found a shoe store in
the neighborhood and bought 100 pair. Of course, the owner was curious as to what I was
going to do with them all? When I told him he gave me a great deal, so I bought 200 pair.