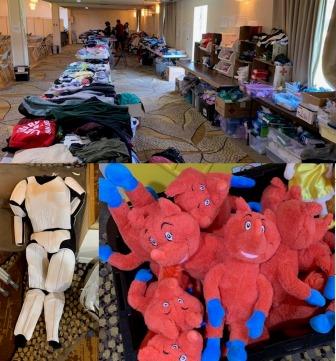 Last week I began writing about my time volunteering in August at a transfer hub in San Diego, CA, for those coming into the U.S. who had been granted hearings for asylum. Everyday U.S. Immigration and Customs Enforcement (ICE) dropped off a couple hundred people at who have surrendered at the border seeking political asylum. The “guests” are mostly young families. They are dropped off at a hotel run by the State of California which offers medical care, lodging, food and a ride to the airport so the asylum seekers can fly to meet their sponsors. I was working with Catholic Charites who help provide hospitality in the form of hygiene products and donated clothing available the couple of days the guests were there.

Part of my work was sorting through cardboard boxes and plastic bags filled with donations of clothing. The first thing I noticed was that almost all the American clothing donations are much too big for those coming across the border with little or nothing who often really need a change of clothes. I was also caught off guard by some of the crazy stuff people put in the donation bags. It made me laugh to think someone donated a Star Wars Storm Trooper costume thinking it is what refugees might really need. Or, as I like to think, perhaps someone escaped the Evil Empire and left this behind having sought asylum from the Dark Side.

A couple of nuns from a border mission came up two afternoons to quietly sit and sort clothes at the hotel. They notice things that are missing and bring them the next time. In between their visits they scour thrift stores for things like back packs and kids’ toys. Once they brought in a bunch of stuffed animals, which I first thought were useless in the face of such poverty. However, I handed some of them to the youngest kids sitting quietly in folding chairs in the hotel ballroom waiting with their families to talk to a case worker. The big smiles on the kids’ faces, the looks of disbelief that this toy was for them, and the immediate response to pull the silly Dr. Seuss character close and cuddle it made me truly appreciate the quiet brilliance of the Sisters.