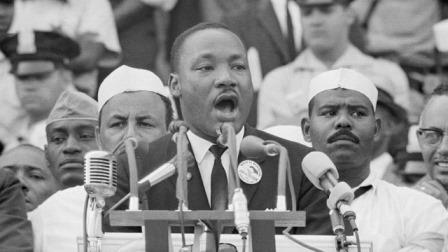 Hanging on the office closet door is a poster with the text of Martin Luther King Jr.s I Have a Dream speech. The iconic speech he gave in 1963 in Washington D. C., which has come to define the Civil Rights movement. I have always been inspired by the poetry of it and Kings melodic crescendo, I have a dream that my four little children will someday live in a nation where they will be judged by not by the color of their skin, but by the content of their character. I have a dream today!

As we mark the sad milestones of the 100th anniversary of the Tulsa Massacre and the first anniversary of the murder of George Floyd, I have been thinking about Kings speech, the continuing long and arduous journey of racial reckoning, and the Dream.

The words we all know are the words from which the speech takes its title, I have a dream! But that was in the final section of the speech. 48 years ago, on the steps of the Lincoln Memorial, King first lamented that almost 100 years later (after Lincolns Emancipation Proclamation) the Negro still is not free. He spoke of segregation, discrimination and poverty still shackling African Americans. And he summed up the whole thing by using the image of coming to Wash-ington to try again to cash a check written to all Americans in the Constitution for true equality which has come back repeatedly to African Americans marked insufficient funds. It was only then after naming this still owed debt that he said, I still have a dream.

In the past year we are coming to see all of the ways the check still bounces, and the Dream still lives. To really see the great disparity today between how White people experience America in contrast to that of Black and Brown Americans and to engage in the hard work to acknowledge the debt is also to embrace the dream.

The debt will not be paid by good intentions or words alone, but also by listening and trusting the experience of those of color as real and common rather than exaggerated and exceptional. And to accept the real discomfort in facing the chronic insufficiency of funds in education, housing, the workplace, the legal system, health care, religion and just ordinary experience.
I have never appreciated fully the wisdom of Kings speech, but he is right. Wisdom is acknowledging the debt and holding onto the dream.