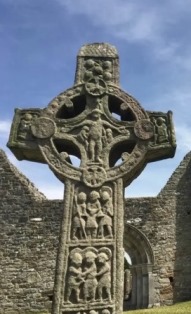 I have become interested in reconnecting with my Celtic roots in the past few years, so I have looked into St. Patrick, the inspiration of Celtic Christianity. As with anyone who lived centuries ago, there are layers of myth and legend surrounding who Patrick of Ireland truly was.

Generally, it is agreed that Patrick was not originally from Ireland, but in fact was first taken there against his will. When he was a teenager Patrick was abducted from his home in England by Irish pirates who took him back to Ireland to tend their herds. Paradoxi-cally during that terrible, lonely time his faith and trust in God seems to have grown greatly. Through a mysterious experience in his early 20’s the way to escape his captivity was revealed to him in a dream. But once home the dreams continued taking the form of letters from the people of Ireland calling him back to share his faith with them.

Patrick studied for the priesthood in order to prepare for the great task of returning to Ireland to spread the gospel. His family thought he was crazy, but after he was ordained, he returned to Ireland, and met with great success spreading the Good News among the people of the Emerald Isle.

Some attribute the creation of the Celtic cross to St. Patrick. The native religion of Ireland was Celtic worship in which the spirits of nature were central to their faith. A particularly strong source of spiritual power was the sun. The cross Patrick designed shows his brilliance in that he incorporated the image of the sun into the cross of the son of God. The circle behind the cross beams in the Celtic cross as the symbol of the eternal presence of God in all things.

As we mark St. Pat’s Day I give thanks that his difficult journey and his deep trust in the God of Love led to share the Light of Christ with our Celtic ancestors.